Part of the Story County Justice Center, the Story County Jail is a new-generation, 104-bed, modular, direct-supervision jail featuring effective control and supervision of inmates and enhanced safety for the public, staff, and inmates. Inmates of all security levels, from maximum to minimum and including work-release inmates, are housed at the jail. The jail was designed to operate efficiently in terms of staffing and inmate management.

The Story County Jail opened in March 2002 and replaced a linear-style jail that had been in operation since 1968 with an inmate capacity rated (most recently) at 31. 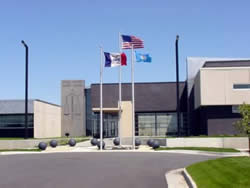 The main objective of the direct-supervision philosophy is to achieve a safer environment by means of compliant behavior. The direct-supervision concept allows fewer liability problems for the county and creates less stress for staff and inmates. If officers are able to mix with inmates in the same area, they can head off problems that might culminate in violence if allowed to continue. The new jail was designed to be expandable, so as to meet Story County's needs now and into the future.