Upon the family's request, Public Law 106-65 requires that every eligible Veteran receive a military funeral honors ceremony, to include folding and presenting the United States burial flag and the playing of Taps.

The DOD began the implementation plan for providing military funeral honors for eligible Veterans as enacted in Section 578 of Public Law 106-65 of the National Defense Authorization Act for Fiscal Year 2000 on January 1, 2000. 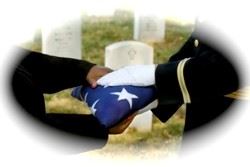 Pursuant to Iowa Code Section 35A.13 and the Iowa Administrative Code 801, Chapter 14, the Iowa Commission of

A United States flag is provided, at no cost, to drape the casket or accompany the urn of a deceased Veteran who served honorably in the U. S. Armed Forces. It is furnished to honor the memory of a Veteran's military service to his or her country. VA will furnish a burial flag for memorialization for an other-than-dishonorably discharged:

Questions or comments concerning the DOD military funeral honors program may be sent to the following address:

Department of Defense
Directorate for Public Inquiry and Analysis
Room 3A750, The Pentagon
Washington, DC 20301-1400