Peterson Park is a 200-acre park situated along the Skunk River Greenbelt offering several bodies of water suitable for fishing, a 31-acre lake, and both prairie and woodland areas. Park entrances are located on the east and west sides of the Skunk River. No alcohol of any kind or size can be possessed or consumed at West Peterson Park.

This land saw many uses--farm, quarry, emergency water source—before being transformed into a park offering diverse ways to enjoy the outdoors.

Evidence of a Buried River

Here, an ancient river created a deep wide valley filled with sand and gravel. When a glacier moved over this area 13,000 years ago, it buried the river valley in sediment called till. Over time, the modern Skunk River eroded the till, leaving the sand and gravel deposits of the original river close to the surface in this location. Water still flows beneath the ground through the sand and gravel of the ancient river bed, connecting Peterson Park to Ada Hayden Heritage Park, another former gravel quarry.

Sand and gravel mining developed on the Peterson family’s property by the late 1920s. In 1938 Ray Cook Construction leased the mining rights, and over the years the quarry came to be known as “Peterson Pits.” This company mined materials that surfaced many of the roads in Story County. In 1966 Hallett Construction, who also mined the site of Ada Hayden Heritage Park, took over the lease. When mining ended, Hallett was removing over half a million tons of sand and gravel from the site each year. Some of the last material mined at Peterson was used in extending 13th Street in Ames from Stange Road to Hyland Avenue.

When the park was established, the City of Ames acquired rights to pump water from the former gravel quarry into the Skunk River during times of extreme drought. Water pumped into the dry river bed soaks into the ground, reaching the aquifer and increasing water levels in city wells. In 2000 a drought forced Ames to turn to the lakes at Peterson Park for this purpose. The lakes were pumped dry within three weeks. Ames later purchased Hallett Quarry, now Ada Hayden Heritage Park, as its preferred and permanent emergency water supply. Both former quarries connect to the groundwater flowing along the buried ancient river valley that is also the aquifer for the City of Ames wells.

In 1979 Story County Conservation purchased the property from the Peterson family with a vision of a multi-use recreation area featuring a beach and river access. They knew the property would need years of reclamation to transform from an active mine to a public park.

Fill sand fifteen feet deep covered what is now the beach parking lot. Earth pushed aside in the mining process needed to be leveled. Heavy equipment would need to reshape the lakes to provide safe access. 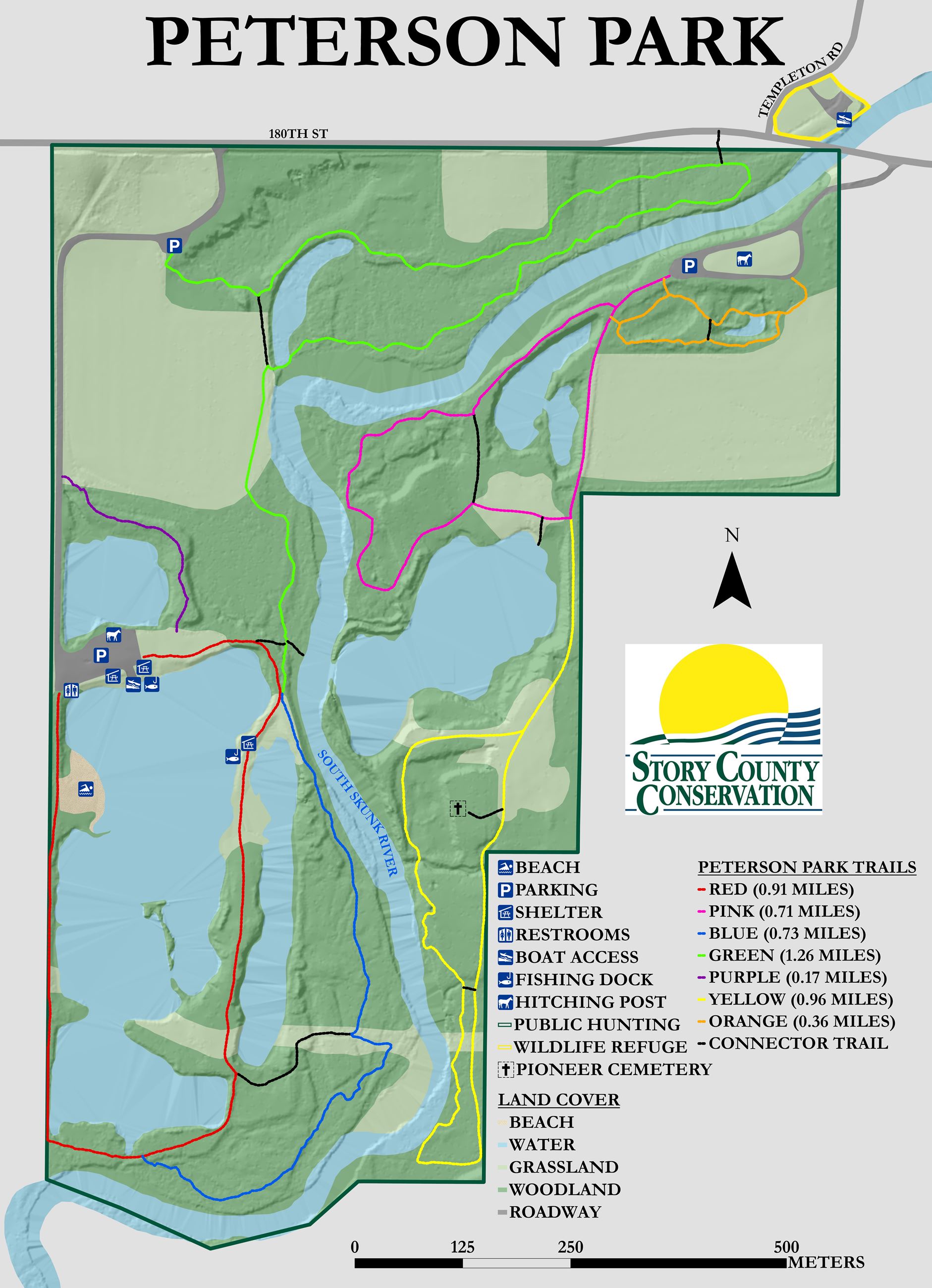